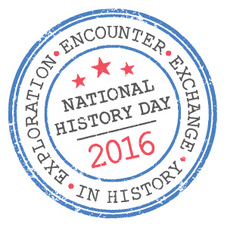 National History Day welcomes you to explore the theme Exploration, Encounter, Exchange in History during the 2015-2016 academic year. This theme is broad enough in scope to encourage investigation of topics ranging from local to world history and across any geographic area or time period. Consider this theme an invitation to look across time, space, and geography to find examples in history of when people took a risk and made a change.

You can begin brainstorming for possible topics by thinking about subjects you are interested in, whether it is science, sports, art, travel, culture, or even specific people. Make note of any areas of interest, creating a list of possible subjects. Talking with your classmates, teachers, and parents about your list can help you narrow down your selection. Throughout this process, keep in mind that your topic must relate to Exploration, Encounter, Exchange in History and must be historical, not a current event.

A million ideas flood your mind when you think about exploration, encounter, and exchange, especially because they can mean many different things. So let us first look at them one at a time.

Exploration
Exploration likely conjures up visions of travelers setting out on a journey to discover new lands. Consider the voyages of Vasco da Gama, Hernán Cortéz, or Ferdinand Magellan. Certainly we can see this in Christopher Columbus’ attempt to find a quicker sea route to the Indies, where spices and other desired goods could be found and then sold back in Europe. Of course, we know that while the original goal of that exploration was not achieved, Columbus and his party did succeed in transforming the Americas, Europe, and Africa forever. Can you think of other examples where exploration led to unforeseen consequences?

Exploration also can be examined in the field of science. Researchers are constantly undertaking scientific explorations to find new medications or possible cures for diseases such as cancer. How did Jonas Salk’s exploration into a vaccine for polio lead to better industry standards in producing vaccines? How did the work of Francis Watson and James Crick in exploring the structure of DNA lead to cracking the code of the human genome? Consider Sigmund Freud’s exploration of psychoanalysis and the developments of various theorists in the field of psychology.

The search for new modes of movement has captivated humans since the beginnings of recorded time. This form of exploration has resulted in the invention of a variety of vehicles that could make excellent topic choices. From the invention of the wheel to the development of the space shuttle and the International Space Station, there is a range of explorations, encounters, and exchanges. How did the design of the longships affect the Vikings’ encounters with non-Vikings?

Ships, trains, cars, airplanes, and rockets each dramatically transformed ideas about what kinds of exploration were possible. In addition, new routes, pathways, and roads played a pivotal role in helping certain transportation options grow in usefulness or popularity. How did the Erie Canal increase encounters and exchanges between different areas within the United States? Once the interstate highways were built, how did they affect travel in the United States?

Exploration does not need to be literal—think of exploration as a new idea, concept, or theory that is tested. This idea can come from the fields of politics, economics, or military science. Consider the ways that political campaigns explored the use of radio, and later television and the internet, to introduce candidates to the public. How did the economic theory of mercantilism drive the exploration of the Americas and exploitation of the resources found there? How did new advancements in both strategy and technology influence the outcome of the Battle of the Atlantic in World War II?

Encounter
Exploration, of course, almost always leads to encounters—with different peoples, unfamiliar environments, and new ideas. Encounters are often unexpected and unpredictable, and they reveal much about those involved. When Meriwether Lewis and William Clark began exploring western North America in 1804, Americans knew little of the vast territory west of the Mississippi River. The explorers’ encounter with that region, however, was shaped in part by individuals like Sacagawea, a Shoshone woman who understood the land and its inhabitants, and served as a guide and translator for Lewis and Clark. How did she influence the expedition’s encounters with other Native Americans? With the plants and animals they encountered along the way? How did Lewis and Clark’s notes and drawings of the geography, wildlife, and inhabitants influence the encounters of later Americans?

Many times encounters involve peoples, plants, and animals that have not previously interacted. How did Matteo Ricci’s efforts at understanding Chinese culture affect his encounter with the Chinese intelligentsia? Consider the major effects on world history resulting from the Columbian Exchange, when people, plants, microbes, animals, food, religions, and cultures moved across continents.

Often exploration leads to occupation or subjugation of other groups of people. Consider the encounters between the Romans and the Germanic tribes of Europe. How did the Mongols, Aztecs, or Incas interact with their neighbors? What factors influence whether a new encounter is seen as a positive exchange or as a disastrous occurrence? Consider the event from both sides and analyze the perspectives of both the conquerors and the conquered.

Encounters also occur between familiar parties. How did the political, social, and cultural differences between the Athenians and the Spartans, differences with which each side was familiar, affect the way the Peloponnesian Wars were waged? How do military encounters differ from environmental and cultural encounters in their consequences? How have these encounters remained the same across time, and how have they varied with changing historical circumstances? How did the horrific encounter with trench warfare in World War I lead to new strategies ranging from bombing campaigns to blitzkrieg?

Exchange
It is impossible to make a journey of exploration, encounter new ideas, and not have some ideas exchanged between the groups of people.

Encounters can lead to many types of exchanges, whether it be goods, food, ideas, disease, or gunfire. The Silk Road, a series of ancient routes connecting the lands bordering the Pacific Ocean to those of the Mediterranean Sea, formed a means of exchange between European, Eurasian, and Asian peoples for more than a thousand years. The Silk Road brought gunpowder, the magnetic compass, printing press, and silk to the West. To China, it brought precious stones, furs, and horses. One of theroad’s best known travelers, Marco Polo, recorded his observations in his Travels of Marco Polo.

But as we know, exchange is not necessarily mutually beneficial. When Europeans were exploring the New World, they brought with them diseases such as smallpox and measles that were contracted by many members of the native tribes they encountered. Having no previous exposure to these illnesses, the natives’ immune systems could not naturally fight these diseases, nor did native healers have the knowledge to treat them. As a result, many natives perished because of their encounter and exchange with the Europeans.

But exchanges do not happen only in the physical realm. The sharing of ideas, beliefs, and customs can have widespread consequences for the people and cultures involved. Consider the spread of any of the world’s major religions. Sometimes the exchange of new or controversial ideas within a society can have a significant effect on how that society thinks and acts. What changes occur within the society because of that exchange? How did Charles Darwin’s theory of evolution, for example, lead to the cultural conflicts of the 1920s?

Politics also can be an area of dramatic exchange. In 1971 the American table tennis team, in Japan for the world championships, was unexpectedly invited by the Chinese team to visit the People’s Republic of China. At that time it had been more than 20 years since a group of Americans had been invited to China, since the Communist takeover in 1949. How did that exchange help President Richard Nixon renew diplomatic relations with China? Did it lead to future encounters and exchanges between the two countries? Establishing relationships is often a major part of new encounters and exchanges.

As you can see, all three elements in this year’s theme—exploration, encounter, exchange—are closely related. Try to find examples of each in your chosen topic, though you should note that some topics will lend themselves to focus mainly on one area. You are not required to address all of these elements in your project. Remember that you are not just reporting the past, but you are investigating, searching, digging deeper into the research to thoroughly understand the historical significance of your topic and support your thesis. You will need to ask questions about time and place, cause and effect, and change over time, as well as impact. To truly grasp your topic, think about not just when and how events happened, but why they happened and what effect they had. Your project should be able to answer the all-important question of “So what?” Why was your topic important, and why should we study or understand its effects today? Answers to these questions will help guide you as you conduct your research and decide how to present your information.